Meet the team behind ReMango! 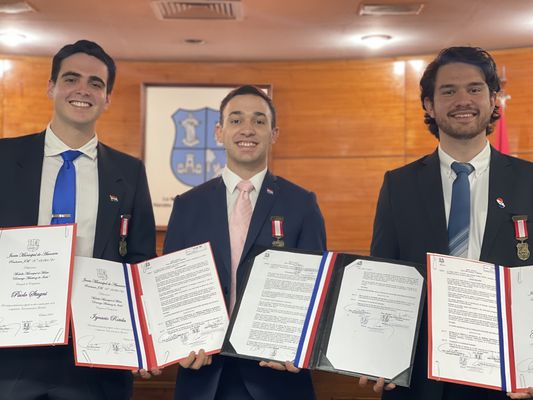 Mangos are one of the most popular fruits in the world; unmistakable for their juicy, rich flavor and vibrant color. But when friends Paolo Stagni, Gonzalo Martinez, and Ignacio Rotela sat down to come up with an idea to submit to the 2021 Hult Prize, they were not looking at the fruit many know and love. Instead, they were looking at 60,000 tons of rotten fruit piling up in the streets of cities around Paraguay. With this, they had found their problem, and began to brainstorm solutions.

They first had to figure out how to get these mangos off the streets. They found their answer with garbage collectors, who were already out traversing the cities of Paraguay every week. By employing these individuals to collect mangos while collecting people’s trash, ReMango would be able to double their pay, providing substantial income to some of the lowest-paid and hardest working people out there. Their products, Impact Juice and Impact Pulp, would provide healthy options for consumers and businesses alike and be produced using the mangos they collect. Their goal became to change the perception of mangos in their home country from one of disgust to one of love, which in turn will reduce waste, provide employment, and create a source of national pride.

With this idea in hand, they applied to the 2021 Hult Prize and began a journey that would test their perseverance and commitment to seeing their idea become a reality. Upon receiving a spot in the 2021 Hult Prize Accelerator, which would be held in the UK, the team realized Paraguay was on the UK’s Red List, meaning they legally could not enter the country due to COVID-19 restrictions. The team was devastated, but determined to find an exception to the rule. They found that exception by convincing the Archbishop of Paraguay to write a letter to the Paraguayan Government, who in turn asked the UK Government to make an exception for three young entrepreneurs. The UK Government said yes and the team was on their way.

If that doesn’t demonstrate commitment and perseverance, what does? This never give up attitude will serve the team well as they continue building their business.

With the funding from Hult Prize, ReMango will continue unlocking a new industry in their country and help other young people be the change they want to see in the world. Their success has been lauded back in Paraguay, with newspapers across the country highlighting their inspiring journey. The trio hopes their journey shows a generation of young people that being from a country often labeled as “third-world” does not mean you cannot find international success and make a genuine impact.